National NGOs elect representatives on the CCM for Global Fund.

The CCM Board has started a new two year term beginning January 2015. Non Governmental constituencies represented on the CCM Board held elections in November and December 2014 to renew their representatives on the CCM as the term of the previous CCM Board ended in September 2014.


He also added that the new CCM members should regularly give feedback to the constituencies and from the latter to Uganda Country Coordinating Mechanism (UCCM), participate in Uganda CCM activities with no Conflict of Interest.


“You should be patriotic and serve with a concern to fight the three diseases (HIV&AIDS, Malaria and Tuberculosis) and observe confidentiality on all information arising out of Uganda CCM activities and to represent the Uganda CCM at any function that is considered important," he added.

Mr. Wamboga thanked members for electing him to represent them and re-assured them that he was the right candidate because he has a lot of knowledge on Global Fund issues.


Story and Pictures by Namirimu Esther
Posted by Unknown at 05:24 No comments:

Transmission and Prevention of HIV

HIV/AIDS Prevention Efforts Around the World

Here is the list of top ten donors that are working very closely to fund HIV and AIDS projects worldwide ranging from grass wood level to National and International level. Their priority is on HIV and AIDS, although they also work for other issues and projects.
UNAIDS (The Joint United Nations Programme on HIV/AIDS)
With the theme “zero new HIV infections, zero discrimination and zero AIDS-related deaths”, UNAIDS is currently working on HIV and AIDS issues in collaboration with many UN agencies. UN agencies that collaborate with UNAIDS include UNHCR, UNICEF, WFP, UNDP, UNFPA, UNODC, UN Women, ILO, UNESCO, WHO and the World Bank. Besides, they work from grass wood level to National and International level in order to get optimum degree of response in relation to AIDS.
AusAID (the Australian Agency for International Development)
With the objective to support developing countries, AusAID has been mainly working in HIV/AIDS field in Asia and Pacific Island countries. AusAID mainly supports Papua New Guinea in relation to HIV and AIDS. In African countries, the agency works in collaboration with Global Fund and UNAIDS in order to add values to their AIDS program. They are also working in HIV prevention as well as harm reduction program among drug users.
JICA (Japan International Cooperation Agency)
JICA is working on Japanese Government’s commitments to work for HIV/AIDS. JICA is working in collaboration with Global Fund to Fight AIDS, Tuberculosis and Malaria worldwide. Usually they work to support quality testing, compilation and analyzing health information and improving service provider’s capacities. They also work in National level for policy development and in sub-regional level.
Irish Aid
Irish Government program to support other developing countries around the world is Irish Aid. They work in HIV/AIDS area in order to support PLHIV and help in spread of infection. They are working to address vicious cycle of poverty and HIV through their program. Irish Aid provides €100 million every year to fight against communicable diseases and HIV/AIDS.
NORAD (The Norwegian Agency for Development Cooperation)
NORAD has been working on HIV and AIDS issues since 1986. Its areas of focus are: limiting the spread of infection, limiting the adverse effect to the target group, human right issues and contribute to socio-economic development of the country.
amfAR
With the dedication to make AIDS history amfAR was founded in 1985. The main area of focus is to end the global AIDS epidemic through research work. amfAR has already invested more than $388 million in research work and in providing grants to other working in HIV and AIDS areas.
Broadway Cares/ Equity Fights AIDS
Broadway Cares and Equity Fights AIDS are two different organizations founded in October 1987 and February 1988 respectively. In May 1992, Equity Fights AIDS and Broadway Cares merged to become Broadway Cares/Equity Fights AIDS. It is one of the nation’s leading industry-based, nonprofit AIDS fundraising and grant-making organizations. The organization has already invested more than $250 in providing services to people with AIDS in US.
EJAF (Elton John AIDS Foundation)
Sir Elton John established EJAF in 1992 that is headquartered in New York City. Similarly, the charity was also established in London in 1993. It is world’s popular non-profit and charity organization working in the field of HIV/AIDS. They work to reduce incidence of HIV/AIDS, eliminate discrimination and stigma related to HIV/AIDS and care, support and treatment to people with HIV and AIDS.
M·A·C AIDS Fund
M•A•C AIDS Fund was established to support global HIV and AIDS issues. It mainly focuses on men, women and children affected by HIV/AIDS. It has been working to financially support organizations working with underserved regions and populations. They are focused to address vicious cycle of HIV and poverty through various programmes.
The Global Fund
The Global Fund is well known and is a pioneer agency that focuses major areas of HIV/AIDS, Malaria and Tuberculosis. It was founded in 2002 and later became multilateral founder in global health. It helps to link 82% of the international funding for TB, 50% for malaria, and 21% for AIDS worldwide. Besides direct funding, they also help in strengthening workers capacity and strengthening the health system.
Information courtesy of Integrated News
Posted by Unknown at 02:57 No comments:

It is surely not easy to find that ‘someone special’ in your life and when you add HIV / AIDS or any other STD to the equation, it can become much more complicated. The most practical way to meet others going through the same condition is to meet them on dating sites dedicated solely to such profiles, such as Positive Singles, HIV People Meet and so on.

We list our top six choices for the best dating sites for the HIV / AIDS community. All the sites offer free membership, though you can access advanced features only through an upgrade to a paid membership. Unique features and intuitive search functionalities and matchmaking systems make these our top choices. 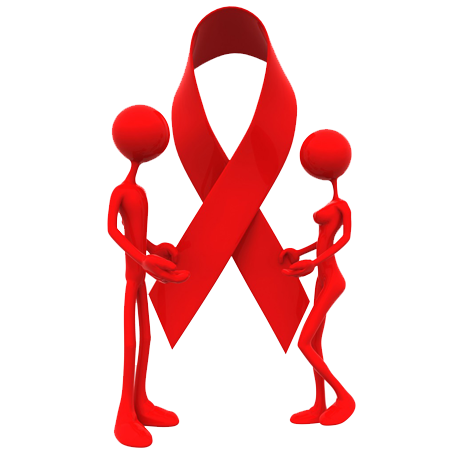 Positive Singles: Among all the dating sites that offer dating opportunities for people suffering from STDs, Positive Singles is arguably the #1 site for people who are living with HIV / AIDS or any other kind of STD and want to share life or find love with others in a similar circumstance. Presently, there are more than 100 million people suffering from sexually transmitted diseases in the United States itself, with the worldwide number going into more than 600 million. Among the group, 82.5 percent of people know Positive Singles and about 61.8% of them have subscribed to this online STD dating site. 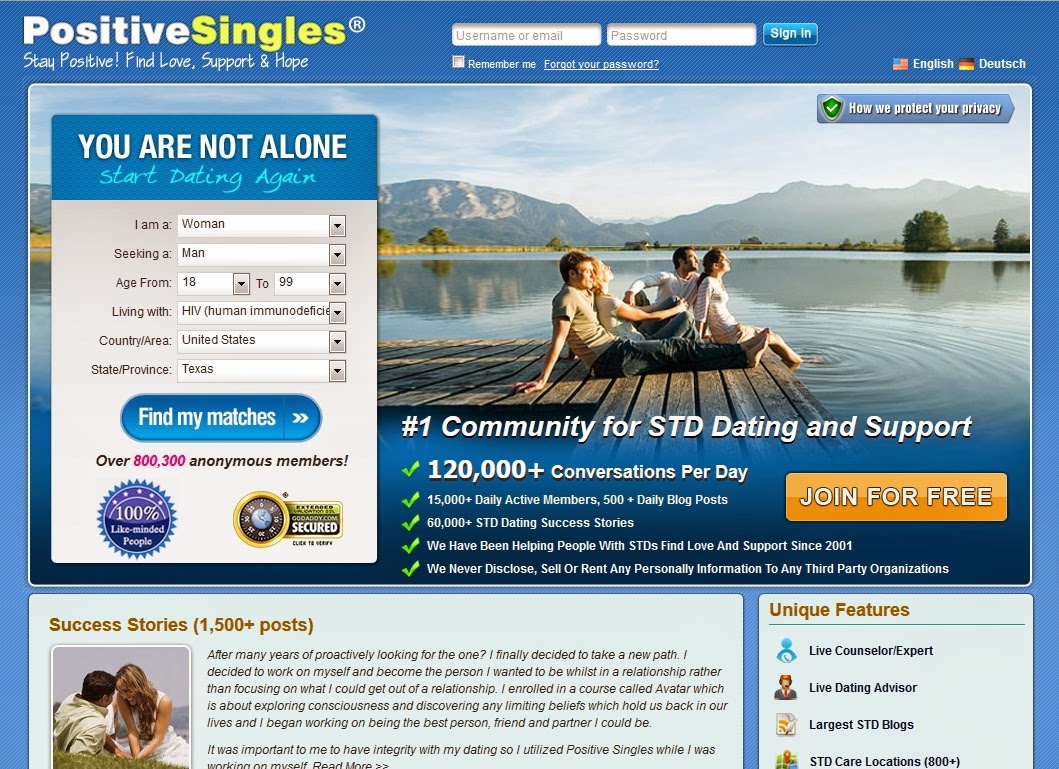 HIV People Meet is our #2 choice offering dating options for people with HIV AIDS. The site is an online dating site for those living with HIV and other STDS and has more than 802,2000 anonymous members. The site offers live counseling and dating advice giving users live support. There are also several blogs, where you can get a lot of information and inspiring stories, information on HIV / AIDS, daily news on STDs, along with support forums and events. An online chat feature is also available to users. 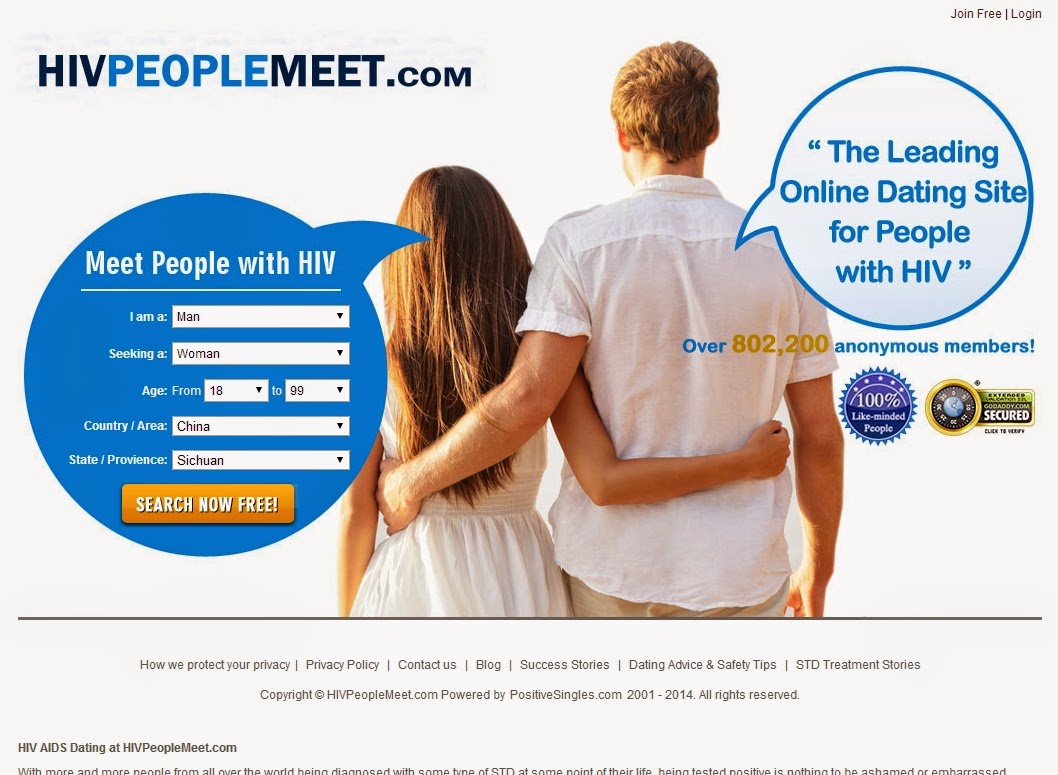 Positives Dating is an excellent online dating services for the HIV+ or STD community. You can find great matches for a romantic relationship and make new friends. The site offers an ideal environment for boosting your confidence. You can also get advice and guidance from others going through the same condition. The site is free to join, but if you want to access all the features, you need to upgrade to a full membership, either on a month-to-month basis or a six monthly basis. 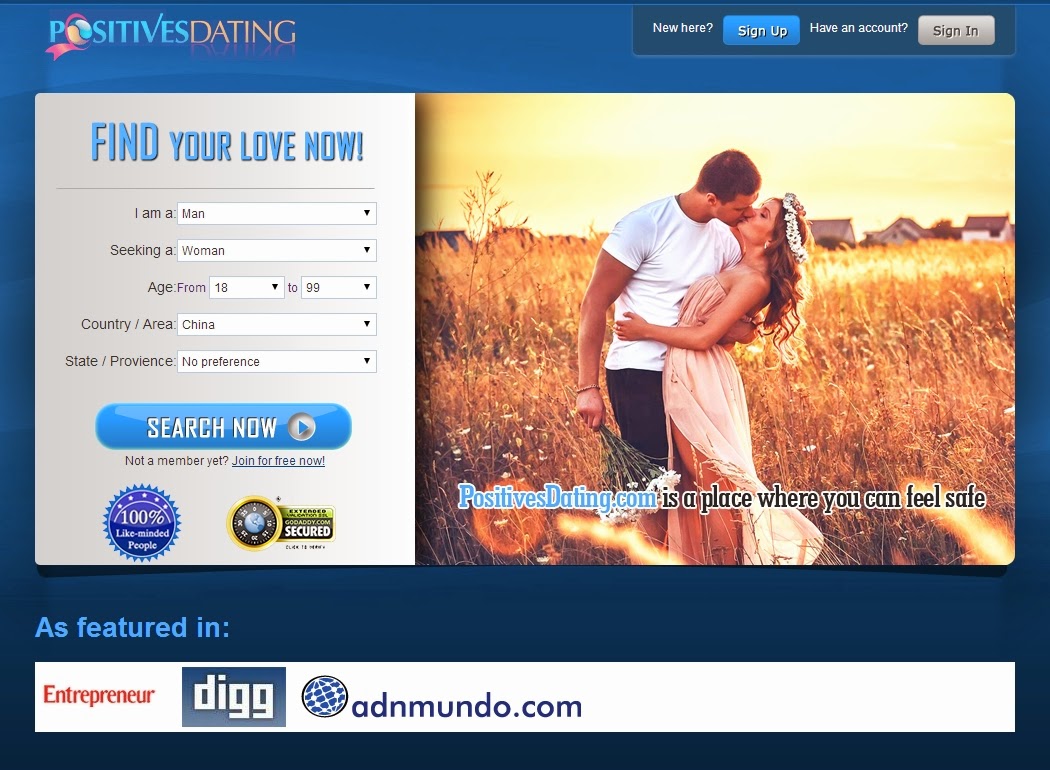 POZ Personals is one of the largest dating sites for those living with HIV, and it has crossed more than 100,000 members and has also launched a premium service. It was launched in 2005, offering a unique dating environment for HIV positive members who seek dating or friendship. The site caters to both men and women, whether gay or straight, irrespective of race or nationality. Registration is easy and it is free, where all you need to do is to sign up and start building up your profile. 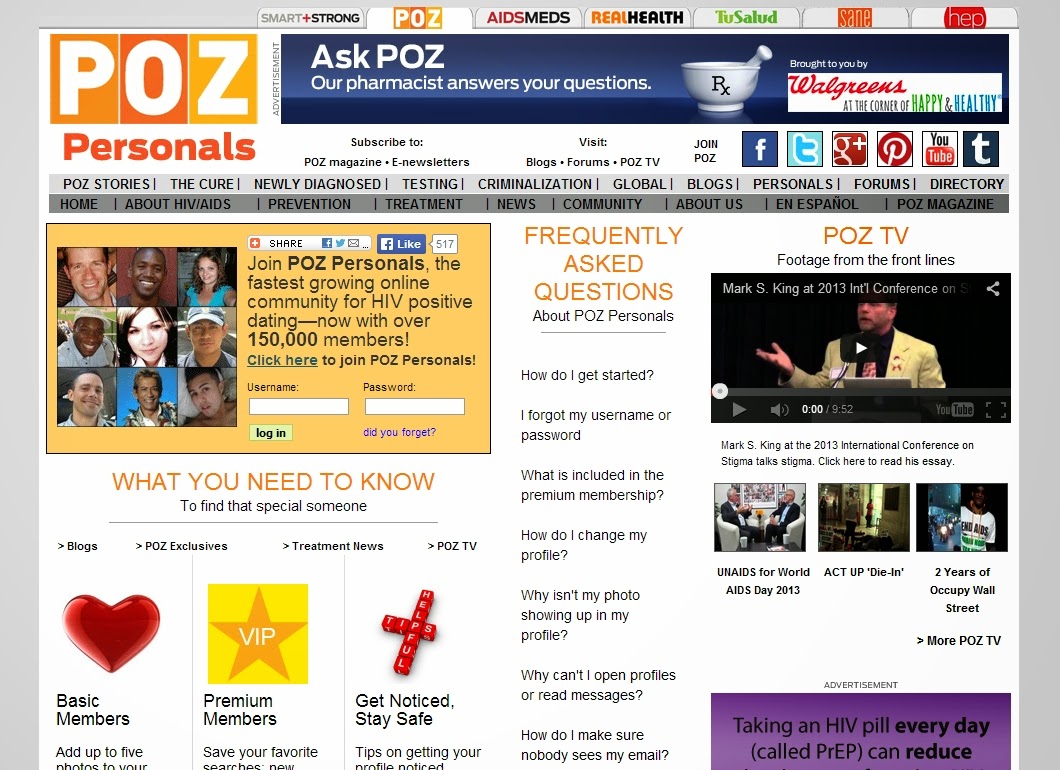 POZ Match has been operating since 1998 and is a very popular HIV dating community. You can join the site free, with the basic membership allowing you to access all services on the site, except initiating an email. However, free membership allows the user to respond to an email sent to him or her. The site has thousands of members hailing from all over the world. People living with HIV / AIDS and who are interested in meeting others for love, companionship or friendship can find others like them from all walks of life. 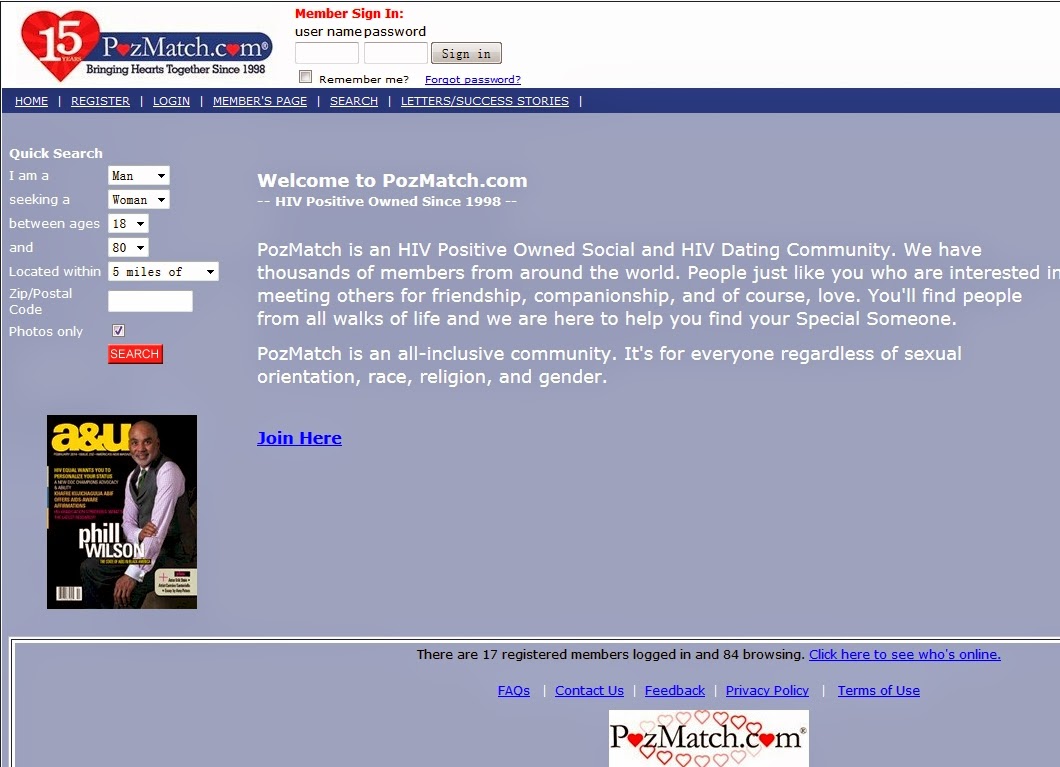 HIV Passions is one of the best free HIV dating and social networking sites for HIV positive singles. If you are looking for love, romance, friendship or just emotional support, you can find all of this and more at this dating site. Merely because you are infected with HIV or any other STD does not mean that it is an end to romance, love or dating in your life. You can still find and love and make new friends. Members can enjoy free photographs. They can text chat as well as chat through webcam.