Uganda’s Finance Minister, Matia Kasaija, yesterday presented the national budget for the financial year 2015/16 at Kampala Serena. Kasaija who was a junior minister took over from Maria Kiwanuka in the March Cabinet reshuffle.

Hon. Kasaija said that an allocation of sh1.270.8 trillion out of shs24 trillion, has been approved to the health sector. 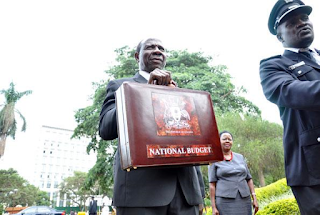 
He also noted that over a number of years, health service delivery has improved as a result of Government interventions with the support of our development partners. From 2006 to 2014 antiretroviral therapy coverage increased from 53 percent to 77 percent, and the Contraceptive Use Prevalence Rate has increased from 24 percent to 30 percent.


The government has undertaken skills development for health workers. Under a Bursary scheme, training and bonding has taken place for 500 midwives, 200 health workers in medicines logistics management, 107 in data management and 296 in integrated diseases surveillance.


He added that despite the progress being registered, Uganda’s high population growth rate, driven by the high fertility rate, poses challenges for health care delivery. Women and children remain the most vulnerable groups to diseases. In order to reduce the disease burden faced by Ugandans, Government has undertaken the following actions:-


“Developed a rapid response mechanism outbreaks of epidemics such as Ebola, Marburg, Yellow fever, and Cholera, in addition to establishing a Laboratory for diagnosis of Viral Hemorrhagic Fever and an Emergency Operation Centre (EOC),” he said.


He noted that the government implemented an aggressive Malaria Reduction Strategic Plan with a target to eliminate malaria deaths and reduce incidences of malaria to 30 cases per 1000 population, by 2020.


The Finance Minister also said that there is an increased in the number of accredited health facilities that provide ARVs from 475 in 2011 to 1,603 by December 2014; This includes 100 percent of public hospitals, 91 percent Health Center IVs are providing ART and 87 percent of Health Centre IVs are also providing pediatric ART.


Reduced by half the number of people dying from Tuberculosis (TB) from 9,900 in 1990 to 4,700, thereby achieving the Millennium Development Goal (MDG) Six target.


Government is also strengthening the capacity of specialized health facilities such as the Uganda Heart Institute and the Uganda Cancer Institute to tackle the increasing cases of medical conditions that require specialized care, and reduce on the cost of referrals for medical treatment abroad.


Hon Kasaija said that in the next year, an allocation of Shs. 1,270.8 billion has been approved to the Health Sector. Interventions in the Health will include construction of specialized Maternal and Neonatal unit in Mulago hospital with funding from the Islamic Development Bank (IDB).


“Continue the construction, expansion, rehabilitation and equipping of Mulago Hospital will continue and expected to be completed by December 2016,” he added.


The government will procure ten (10) ambulances for the planned Ambulance System for Kampala metropolitan area.
He added that government will rehabilitate and upgrade Rukunyu, Maracha, Kansunganyanja, and Rwashamaire health centers; 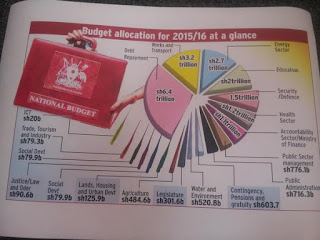 
With support from the Italian Government, we shall construct 69 housing units at Health Centre IIIs in districts of Kaabong, Abim, Kotido, Moroto, Amudat, Napak and Nakapiripirit in the Karamoja region;


Reconstruct Kawolo and Busolwe Hospitals with the aid of a Spanish Debt Swap Grant; This will include extensions of Out Patient/Casualty units, building obstetric theatres, expansion of the delivery suites, and improvement of maternity wards;


Rehabilitate expand and equip Yumbe and Kayunga Hospitals with support from the Saudi Fund/Opec Fund for International Development (OFID) and Arab Bank for Economic Development in Africa (BADEA). This will include construction of Staff houses and provision of ambulances.


Enhance the treatment against Hepatitis B with an allocation of Shs. 10 billion.


Government will directly seek to address the health of mothers and children. Providing comprehensive antenatal care and malaria prevention for pregnant women, in addition to HIV voluntary counseling and testing services and nutritional supplements will go a long way in this quest.